₪
(code html — &#8362;)
The symbol of the Israeli shekel (like $ for the Dollar or & euro; for the Euro) is a monogram of two letters of the Hebrew alphabet - ש (hat), from which the full name of the Israeli national currency begins (Hebrew שקל שדש; "shekel hadash", "new shekel"), which can also be abbreviated to ש & quot; (Pronounced "shah").
ILS
-4217
ISO code.
Money
(כסף cachef — silver, money)
In Hebrew, silver and money are one and the same word.
New Shekel
When the Shekel currency was introduced in Israel, a large inflation began immediately. Then there was a denomination - just cleaned 3 zeros (like ours) and exchanged the old 1000 shekels for 1 new shekel.
Shekel
In the Bible, sikl ( שקל is the shekel from the jackal שקל - weigh) the measure of the weight of gold and silver from the ancient Jews and other Semitic peoples; Shekel silver (a coin weighing about 14 grams) served as the standard monetary unit in the Middle East.
Today 23 Shvat 5730 AD Wednesday, (10 August 2022)
Currency Classifier
Money in Bible/ The Principle of the Financial System in the Bible

All major shopping centers accept credit cards. In small shops when paying by credit card, discounts can be lower than when paying in cash. There are a lot of ATMs, and withdrawing money from them is not a problem. We must remember that banks and exchange offices on Saturdays do not work. In case of emergency, it is sometimes possible to change money in small shops or in kiosks in the city.

In some places, dollars are accepted for payment. Mostly traders on the street.

In Israel, all the world's leading plastic cards are accepted. You can pay by cards or withdraw money from ATMe.

Most of the shopping centers, as well as clothing stores leading Israeli and European brands are in Tel Aviv. In Israel is well-developed textile and food industry, electronics and electrical engineering. In Israel, you can buy clothes, electronics, jewelry and accessories of very high quality. Prices are moderate enough.

The Arabs do not give up. Keep in mind.

In Israel it is customary to give tea, in some bars, coffee and restaurants tip is automatically included in the bill. In other cases, you can leave the waiter "for tea." Tipping is usually left at about 10% of the invoice amount.

In Israel all prices are specified in shekels, only shekels are accepted for payment. You can change money in banks, in all banks the exchange rate is the same.

Everyone who enters the calculus must give half the shekel, the shekel of the sacred; In a shekel twenty ger: a half-shekel offering to the Lord; (Exo.30:13) In biblical times there was a coin in half a shekel and such a tax should be given to the Jews to the temple.
By the way, this was the way of the population census, because everything was given to the church.

Old half-shekel
Today, Israel is trying to keep history, even in small things, because in the course of the coin in polshekelya. There is not written 50 logs, as is usually written in all countries, namely 1/2 shekel. On the reverse side, like and on all coins - a picture that was found on old coins. In this case it is a musical instrument similar to our harp. Maybe David played on that. But we do not know exactly what instrument David played on. The instrument on which David played was called in Hebrew כינור - film. Today, this word denotes a violin, but David did not play the violin. David played on one of the ancient stringed instruments unknown to us. 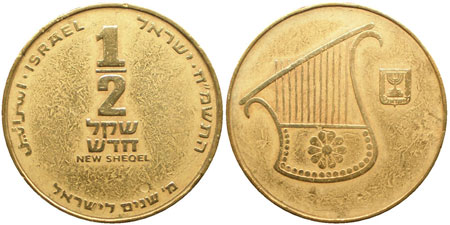 If there is white metal on the coin, then it's shekels. 10 shekels - white metal, in the middle yellow.
A small coin is fires (on Hebrew roundabout sounds), coins are completely made of yellow metal. 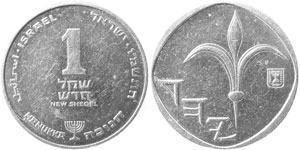 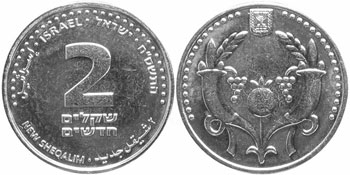 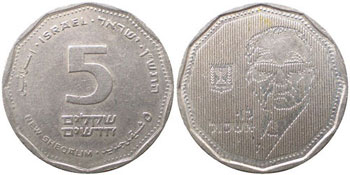 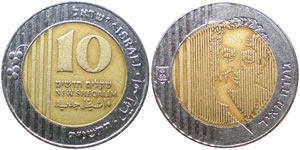 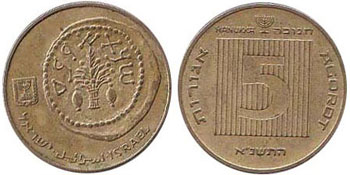