Cinema on the map

Search for movies, since 1890.
News, reviews, the poster of cinemas of large cities. You can buy a ticket.
Wallpapers, photos, posters, trailers. Box office and much more. The site provides information about movies, television series, as well as about all the personalities involved in making films: actors, directors, producers, scriptwriters, operators, etc.Also on the site Posters, covers, teaser-trailers for films are placed, and KinoSearch itself translates some trailers into Russian. The site has a media base, which includes: photos of stars, frames and posters from films, soundtracks, trailers, wallpapers.
In addition, the site publishes reviews of the film critic Sergei Kudryavtsev from his book "3500 film reviews".Mobile version - m.kinopoisk.ru

The site features broad social networking opportunities, a community of website users is formed. Users have the opportunity to write reviews of films, put ratings, participate in surveys, create their lists of films and stars, receive personal recommendations, book movie tickets, exchange messages, add each other to Friends, read a tape of friends, subscribe to updates To the movies.
The site also has a forum. Based on user ratings to films, a rating of "250 best films" is formed.

A way to choose how to spend your free time.The site contains the most complete and most accurate database of movie shows, concerts, exhibitions, and theater performances; The largest catalog of addresses of restaurants, clubs, museums, exhibition halls and shops in the largest cities Russia. The most authoritative book, music, restaurant And film critics publish their reviews and blog on the Afisha. In addition to professional reviews on the site, every month more than 3 thousand user reviews and over 30 thousand user ratings are published.You can book a movie ticket for free.We go, our city is displayed automatically, choose "Cinemas", choose a cinema from List.There is a mobile version. 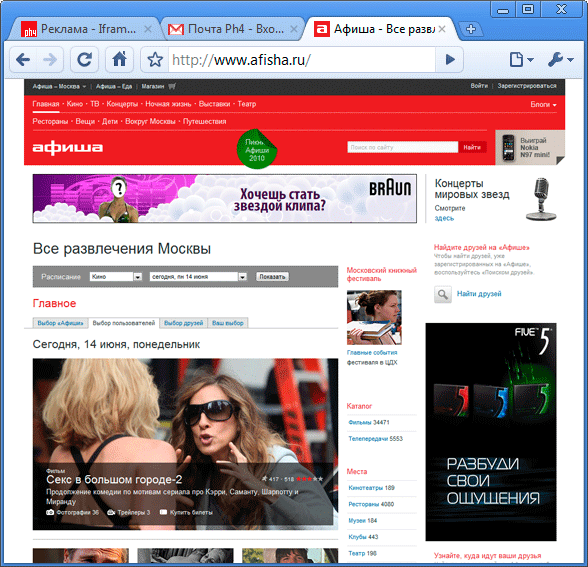 Kazakhstan Cinema on the map

Cinema on the map.