Our attitude to Orthodoxy 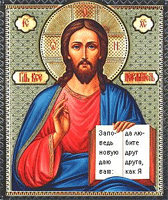 I will not hide the fact that evangelical Christians treat the Orthodox Church very differently. There are those who very negatively respond to the Orthodox Church. These are people who were imprisoned through the fault of the Orthodox Church. Not everyone is able to cope with the root of bitterness in this situation. In any case, any dislike, the more hatred can not be justified, but one can understand.

My mother is Orthodox

My mother is from the most faithful family in her big village. When the choice arose - a pioneer tie or church, for her the choice was obvious. But since they did not let her into the school without a tie, she paid education for her faith. My father was a military and an atheist. It was extremely dangerous for the military to believe in God, because I had never heard of my mother's faith. When I came to God in the evangelical church and began to serve, my mother did not condemn me because I did not come to "our" CHURCH, but on the contrary was glad that I came to God. And I am grateful to my mother, because she baptized us all in childhood.

And all the vessels of the house of God, great and small, and the treasures of the house of the Lord, and the treasures of the king and his princes, all he brought to Babylon. And they burned the house of God, and destroyed the wall of Jerusalem, and all the palaces burned with fire, and all its jewels were destroyed. And he removed the remnant of the sword into Babylon, and they were his slaves and his sons, until the accession of the king of Persia, until, as the word of the Lord was spoken by the mouth of Jeremiah, the earth did not celebrate its Sabbaths. On all days of desolation, she sabbatized until the fulfillment of seventy years.

Biblical notion of the church

In the Bible there are 3 concepts of the church: It does not matter what I think about the church, how I believe what we think, etc. It is important that God thinks. He does not have a national church. He has children, obedient and not very much.

Unfortunately, people confuse politics, nationality, nationalism and religion.
But these are completely different things. Today, there are so many needs in Russia, that each church will have enough space, only serve.
At all times there were religious leaders of different faiths who were torn to power.
As a result, the time of the Inquisition. It's important to be in place. God does not have an Orthodox church, Catholic or Protestant.
Full version
Night mode