Yandex
(Yet Another indexer)
During the 4 years of the public existence of Yandex, there were other interpretations. For example, if the word "Index" translates from English the first letter ("I" - "Ya"), you get "Yandex". It should be clarified that usually the start page of the site is called INDEX (index.html, index.php ... depending on the language on which the site is executed).
Meet, Yandex | Google story

Founder and director of Yandex technology and development.

iseg.yandex.ru Was born on September 13, 1964 AD
Died on July 27, 2013 AD (48 year) cause of death - stomach cancer.
Education - Moscow Geological Prospecting Institute 1981-1986, geophysical faculty.
Together with his wife Maria, Ilya Segalovich is actively involved in charity (the organization "Children of Mary"), arranges a visit to Russia for the entertainment of sick children of the international team of clowns Patch Adams, and he himself often plays in this team.

Co-founder and CEO of Yandex. 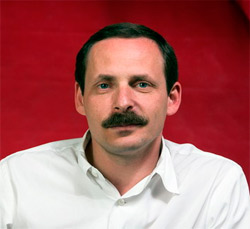 Was born on February 11, 1964 AD In the city of Guryev of the Kazakh SSR (now Atyrau).
He graduated from the Institute of Oil and Gas. IM Gubkin on the specialty "applied mathematics" in 1986. He was engaged in research in the field of processing large volumes of data in the Institute of Control Sciences (ISU) of the USSR Academy of Sciences. In 1989 he founded the company Comptek, was its CEO until 2000 year. In 1998, as head of the Committee for Wireless Access Networks of the Russian Association of Documentary Telecommunications (RANS.RU), Arkady participated in the process of deregulation of frequencies for wireless operators. In 1999, he was one of those who influenced the fate of legalizing IP-telephony in Russia. Since 2000 year - the general director of the company Yandex. Since 2007 - Head of the Department "Data Analysis" at the Faculty of Innovation and High Technologies of the Moscow Institute of Physics and Technology.

The history of the company "Yandex" began in 1990 with the development of search software in the company "Arcadia". For two years of work, two information retrieval systems were created - International Classification of Inventions, 4th and 5th edition, as well as the Classifier of Goods and Services. Both systems worked under DOS and allowed to search, choosing words from the given dictionary, using standard logical operators. In 1993, Arcadia became a division of CompTek. In 1993-1994, software technologies were substantially improved due to cooperation with the laboratory of Yu. D. Apresyan (Institute for Information Transmission Problems of the Russian Academy of Sciences). In particular, the dictionary that provides a search with the morphology of the Russian language taken into account, was only 300 Kb, that is, it was loaded into RAM and worked very quickly. From that moment, the user could ask any form of words in the query. Based on the new technology, in 1994, the "Biblical Computer Directory" was created (an information retrieval system that provides work with the Synodal translation of the Old and New Testaments). In 1995, the project "Academic edition of classics on CD ROM" was launched, developed in conjunction with the STC "Informregistr" and IMLI them. M. Gorky RAS with the support of Roskominform. For this project, the universal technology "Argonaut" was created, which included both markup and display tools, as well as navigation aids, as well as various searches - both textual and attribute. On the basis of this technology, 3 editions appeared - the reference book of the standards "Inform - Normative", the electronic scientific publication "A. S. Griboyedov "and" Pushkin. Electronic Fund of Russian Classical Literature ". Griboedov's language dictionary was also created. At the beginning of 1996, an algorithm for constructing hypotheses was developed. Henceforth, the morphological analysis has ceased to be tied to the dictionary - if there is no word in the dictionary, then the dictionary words most similar to it are found and a word-change model is built on them. At this time, the Internet in Russia was just beginning ...

In the summer of 1996, CompTek's management and the developers of the search engine came to the conclusion that the development of the technology itself is more important and interesting than the creation of application products based on search. Market research has shown timeliness and great prospects for search technologies. Then the Internet and appeared "Yandex." The word "Yandex" was invented a few years earlier by one of the main and oldest developers of the search engine. "Yandex" means "Language index", or, if in English, "Yandex" is "Yet Another indexer". During the 4-year public existence of Yandex, there were other interpretations. For example, if the word "Index" translates from English the first letter ("I" - "I"), you get "Yandex". At the Netcom'96 exhibition, October 18, 1996, CompTek announced the first products of the Yandex series (Yandex.Site, Yndex.Dict). Яndex.Site - search on your site - now installed on hundreds of servers Runet. Yndex.Dict, the morphological extension of the query, is still used for, for example, to send a request to Yahoo, although today it is not so actual anymore - Yahoo indexes the Russian Internet much worse than Russian search engines. Six months later appeared Yndex.CD - search for documents on CD-ROM, and then Yndex.Lib - a full-featured Yandex library for embedding in various applications and databases. Six months later it became obvious that nothing separates CompTek from creating its own global search engine. The volume of the Runet was then only a few gigabytes. In the fall of 1997, Yandex.Ru was opened. The need to support the work of Yandex.Ru under conditions of large volumes and heavy loads (several requests per second) leads to optimization of algorithms, which are then used in other Yandex products.

Yandex appeared on the market when the search engines reigned there, which were searched on the English principle. It is known that in English, the words are almost not inclined. Segalovich took the Bible Symphony, studied the principle, because it was done taking into account the morphology. First, e-Bible (or rather the reference book) was searched, later this principle was adopted as a basis. The search system Yandex.ru was officially announced on September 23, 1997, and for the first time it developed within the framework of CompTek International. As a separate company, "Yandex" was formed in 2000. The company achieved self-sufficiency in 2002, the turnover for 2009 was $278 million. By the way, the search engine Yandex could buy Rambler (on that time the search leaders in Runet), and very inexpensive, but could not assess the outlook.

All Yandex offices on the world map The main office of the company is located in Moscow. The company has offices in St. Petersburg, Yekaterinburg, Novosibirsk, Odessa, Simferopol, Kiev and Kazan.
In mid-June 2008, the company announced the opening of Yandex Labs, an office in the US, California.