The card is open and evolving. More details are routes, airports ... where there are more active Internet users. This is first west and major cities.

Public vehicles of the world on a map.

Another map that uses the base OpenStreetMap.

On the map you can see the red dots, by clicking on them you can get the route of the transport with the schedule and you can watch the vehicle finding in real time where there is such a possibility.

Bike Share Map shows the locations of docking stations associated with bicycle sharing systems from 400+ cities around the world.
Each docking station is represented by a circle, its size and colour depending on the size and number of bicycles currently in it.
The maps generally update every few minutes.

There is a version that replays the last 48 hours of colour and size changes.
In many cities, an ebb and flow of cycle commuters can be seen.
Bike Share Map is complemented by a UK bikeshare news blog, Bikesharp.

The goal is to collect information useful to seamen and yachtsmen, and provide it in a convenient form.
Here is information about lighthouses, buoys and other navigation signs, repair shops, shops, restaurants, etc.

OpenStreetMap is a free project for the joint development of public maps and diagrams of cities, streets, roads with the help of manual or automatic data entry, as well as obtaining data from portable GPS-receivers.
The project site runs on the MediaWiki engine, similar to Wikipedia.

Maps are licensed under the free license CC-BY-SA 2.0 (for CC-BY-SA 3.0 license, Which is used in particular for Wikipedia's text content, the project has not been transferred, but version 2.0 is compatible with it, and OpenStreetMap has nothing to do with the Wikimedia Foundation.

I found the plans of many cities that are not in Google maps, or Yandex.Maps.

Free topographic maps based on OpenStreetMap data with a digital elevation model (SRTM).

The project site has the ability to download maps of regions for Garmin devices.

supported by the Friedrich-Alexander University Erlangen-Nuremberg

Map of the world metro.
You can choose a city in the search form or in the list, the zoom will not work.

This is an open map and is created by the whole world. Therefore, not everything is noted, for example, the Metro of Moscow is there, but it is empty. Probably because we have enough good Moscow metro cards, so it is not in demand.

Filters allow you to disable subway lines.
It is possible on a time scale to examine how the metro looked like, how it developed.

A map with filters for the most convenient organization search.
On the right, you can choose what you want to see on the map by category.
In the top menu, you can make a selection by groups, mark all at once, or remove all marks.

If you notice an inaccuracy, you can go to the source of the map source - OpenStreetMaps in your account and correct the errors. 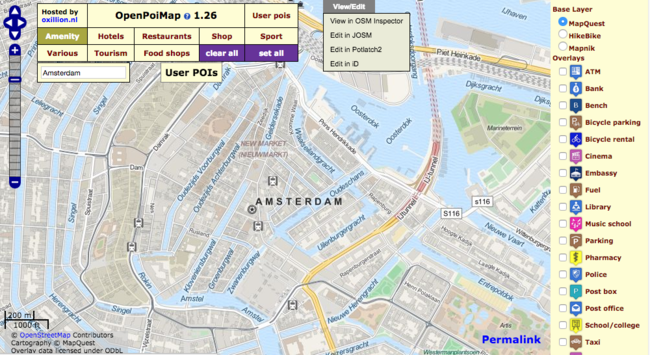 The Russian part of OpenStreetMap.
The site is somewhat similar to the original one, but here you can choose the maps - Bing Snapshots, Cosmosnimki, Bicycle Map and a number of more.

This is convenient because the original OpenStreetMap does not

All public transport (railroads, subway, streetcars...).
The map does not include airways, monorails, and maglevs.In fact, all the leading online maps have railroads, but they are marked somehow secondary and monotonous.
This map shows the railroads clearly. In addition, there is a distinction between major railroads and local ones.
For example, there are railroads that only carry raw materials to a factory or fuel to an airfield.
Now we have a large number of large factories, enterprises, ports .... And naturally, branches of railroads are being built to them, and quite decent sections.
On normal maps, such sections are not indicated. here are indicated. When you zoom out of the map, the secondary sections disappear and we see only the main sections of the railroad and only when you zoom in you can see everything. There is a filter to help you know the speed, electrification ...