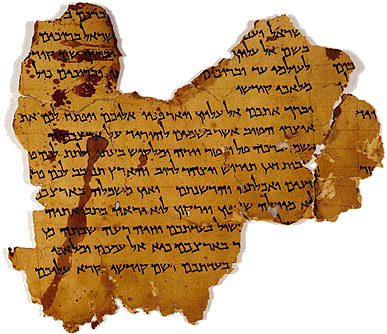 One of the fragments found 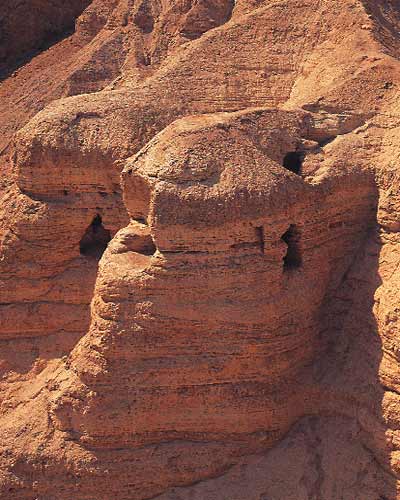 Qumran caves in which scrolls were found 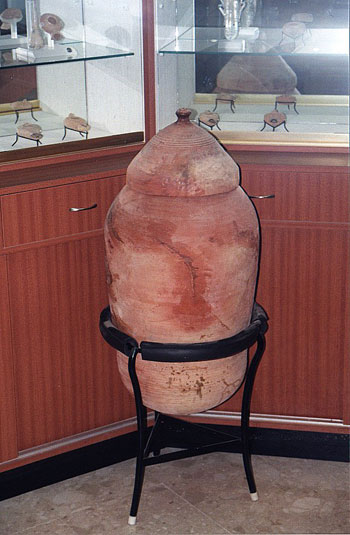 The clay vessel, one of those in which scrolls were stored
In early 1947, two young shepherds from the Taamir tribe grazed goats in a desert area called Wadi Qumran (West Bank of the Jordan), on the northwest shore of the Dead Sea, 20 km east of Jerusalem. Their ATTENTION attracted a hole in the rock. Penetrating through it into the cave, they, and to their surprise, found there eight large earthen vessels. In one of them there were several scrolls, sewn from pieces of parchment and wrapped in pieces of linen cloth. Parchment was written in parallel columns of the text in a language other than Arabic. For many weeks the young men found a find before they reached Bethlehem, where they offered scrolls to a Syrian merchant who sent them to the Syrian Metropolitan Jeshua Samuel Athanasius at the monastery of St. Mark in Jerusalem. Metropolitan realized that these are Hebrew manuscripts, and bought 4 of them and a number of fragments, leaving the rest at the merchant. But everyone to whom the rector showed his acquisitions, unanimously argued that manuscripts can not be ancient. This prejudice was explained by the fact that, with the exception of the so-called. Papyrus Nash, containing only the Shema prayers and the Ten Commandments in Hebrew and dated from the 2nd century. BC. On 1 in. AD, the biblical texts in the Hebrew language were known only by comparatively late manuscripts, not earlier than the 9th century. Only at the end of 1947 Professor E. Sukenik, an archaeologist at the Hebrew University in Jerusalem, managed to acquire the 3 remaining manuscripts from a merchant from Bethlehem. The first to realize their ancient origin and significance, Sukenik dated manuscripts of the 2-1 centuries. BC. A subsequent radio carbon study of the linen fabric into which the scrolls were wrapped, generally confirmed this dating, pointing to a period between 167 BC. And 237 AD In 1948, the Metropolitan sent several scrolls to the American School of Oriental Studies in Jerusalem, where they also recognized their significance. In early 1949, the Metropolitan left the war-torn Jerusalem and sailed to the United States, taking with him the scrolls of the book of Isaiah, the Charter of the community, comments on Habakkuk (Habakkuk), the apocalypse of Lamech and large fragments of the book of Daniel. In 1954, they acquired the University of Jerusalem through intermediaries. Documents that originally fell into the hands of Sukenik include a fragment of the book of Isaiah, the scroll of the War of the Sons of Light against the sons of darkness and Thanksgiving hymns. It is difficult to overestimate this finding. There were manuscripts of all the books of the Old Testament (Tanach), except for the book of Ruth. These findings confirmed the accuracy of the biblical text. In addition, there were found and simply historical records. This helped to confirm the authenticity of the Bible.

The Dead Sea Scrolls by Google

About 5000 photographs of manuscripts of high-resolution Qumran scrolls and comments.

The main exhibits are scrolls of the dead sea. As can be seen in the photo below, the design of the building of the museum itself is made in the form of a clay vessel cover in which the scrolls were kept.With the assistance of Google, 5 online scrolls, including the most extant - the prophet Isaiah, became available. Very conveniently done, in the form of a scroll, which you can scroll, zoom in and see on the scale in which place of the scroll you are. We'll move the mouse over the scroll, the verse will be highlighted, and in the clue there is a place in the Bible, with a click on the translation into English.Thanks to the skillful work of photographer Ardon Bar-Hama, even the smallest details are visible on them. The resolution of the photos is 1200 megapixels, which is 200 times higher than the quality of a normal picture.
With this resolution, you will see how thin the animal skin on which it is written is just one tenth of a millimeter.This is a digital scroll. 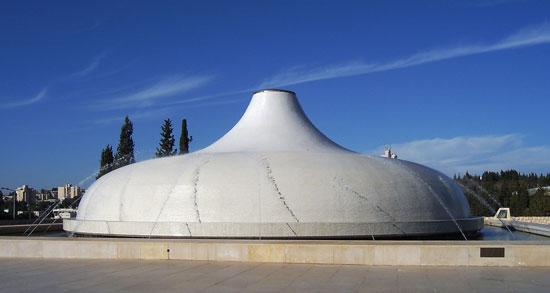 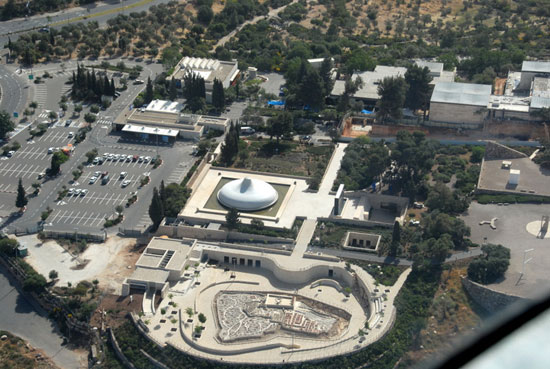 The territory of the museum