On Google Maps
ציון ion - sunny, shiny. A fortified hill that was captured by David and turned into Jerusalem.
Zion or Mount Moriah, this is the place where the temple is located. Already then it began to be called the Temple Mount. In the old Jerusalem, a Christian temple was set up, which was called a temple in Zion, after which it was so called Zion and the mountain on which it stands. In this temple is the alleged tomb of King David. This error and gave the name to the Jewish revival movement of the Zionist movement. The essence of the name is the revival of an independent Israel, as it was under King David. And because the alleged coffin of David is on a mountain that Zion was mistakenly called, and gave this name to their movement. 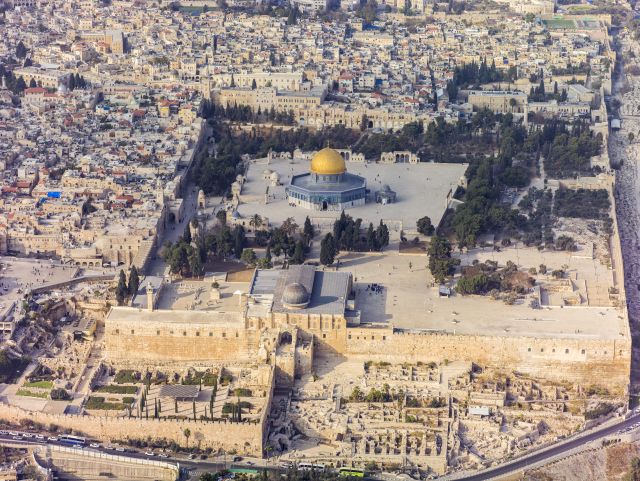 גוגלולת gullet is the skull. From גלגל - a wheel, a rim, a circle.
There are 2 supposed places: one classical, it is also a place of convergence of blessed fire.

On Google Maps Hebrew does not. They have one word - olive, olive tree, olive oil, olive mountain. Its peak, reaching 800 meters above sea level, is the highest point in the vicinity of Jerusalem. Because this is the best viewing platform. The importance of this place for believers - from this mountain Jesus visited Jerusalem in the last days before the crucifixion. At the foot of this mountain, He was arrested. Here Jesus ascended, here and will return. When he returns, then the mountain will move apart, which is not surprising. Because the mountain consists of 2 halves. The mountain itself lies between the Judean Mountains and the Judean Desert. Maybe from 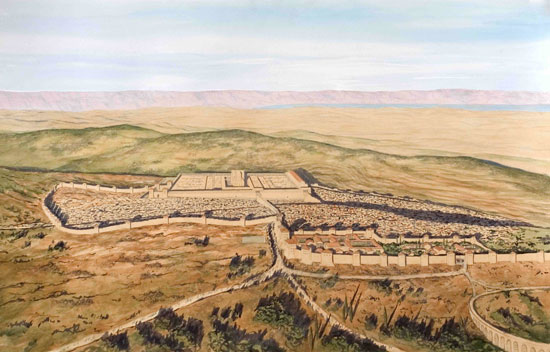 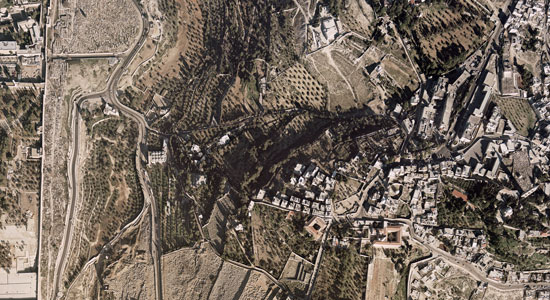 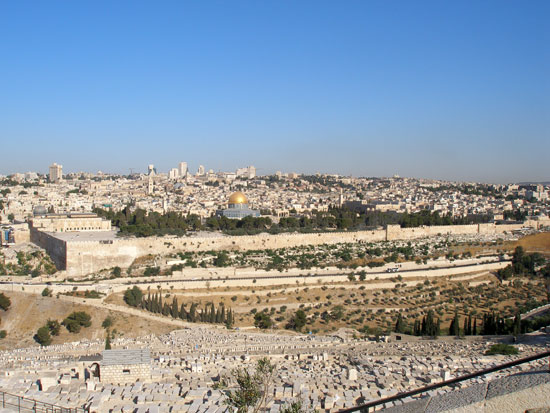 On Google Maps The place where Elijah defeated the priests of Baal. A beautiful view of the Jezreel Valley.

On Google Maps Mountains to the west from the Lake of the Kinneret.
The mountains consist of soft limestone and dolomite.
Height 500-1200 meters above sea level.
Due to the non-drying creeks and comparatively abundant precipitation this area remains green year round.
The inhabitants of Galilee and the Golan - about 17% of the population of Israel - are engaged mainly in agriculture, light industry and tourism-related industries. 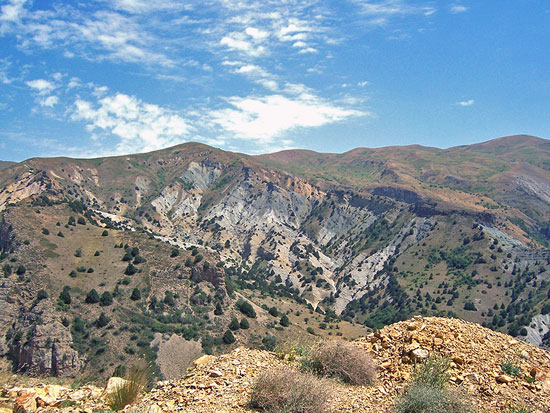 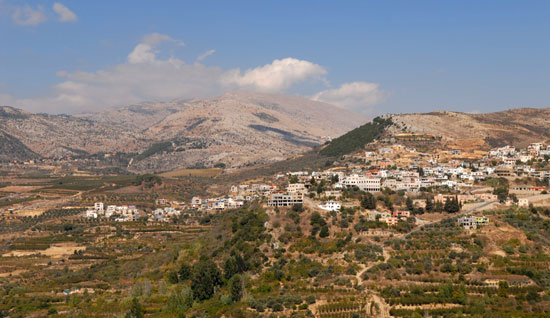 On Google Maps The origin of Mount Hermon. If the appearance of the lake Kinneret and Dead Sea - filling the pit that arose in the aftermath of plate movements, the appearance of Mount Hermon is where one plate collides with another and a fold occurs. Mountain Hermon is a ski resort. Small, but sufficient for Israel.
But not every year the summit of Hermon is snowy. If the top is not snowy, then there is little water and summer will be scarce.

Hermon in the Bible

Psalm 132
1 The Song of the Ascension. David. How nice and how nice it is for brothers to live together!
2 This is like a precious oil on the head, flowing down on the beard, the beard of Aaron, flowing to the ends of his clothes;
3 as the dew of the Hermon descending to the mountains Zion, for there the Lord commanded the blessing and life for ever. What is the Herma Dew?
On Mount Hermon, the Jordan feeding the Kinneret begins. Water is the source of all life in the east. And the Jordan begins with the dew of Hermon. Another mountain of Hermon is supposedly a mountain of the transfiguration of Jesus. Before, traditionally, the mountain of transfiguration was considered Tabor. But Hermon is more suited to the description. 2 And, after six days, Jesus took Peter, James and John, and elevated them to a high mountain especially them, and changed before them.
3 His garments became shining, quite white, like snow, as on the earth the whitener can not whiten.
(Mar.9:2,3) In Mar.8:22 it is said that they were in Bethsaida, and the high mountain is Hermon. All the others are not high on its background.
Of course, it was possible to get to Tabor in 6 days, but the Bible does not indicate that they were going. So we can only guess.
Therefore, we will be correct - this is one of the 2 prospective places.

On Google Maps The Battle of Megiddo Here the battle of the last time is expected. In Hebrew, Mount Megiddo sounds like "Har Megiddo", hence the name Armagedon. Usually means Jezreel Valley near Mount Megiddo. 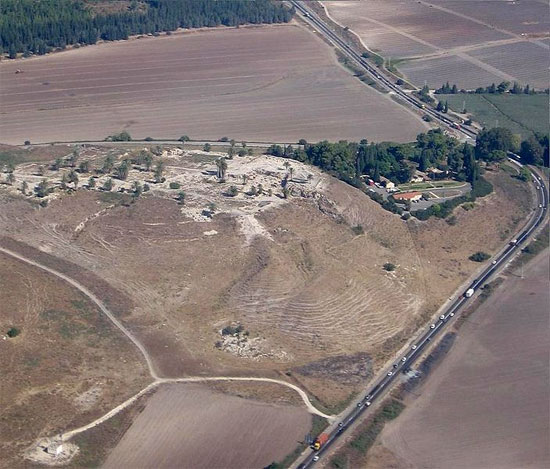 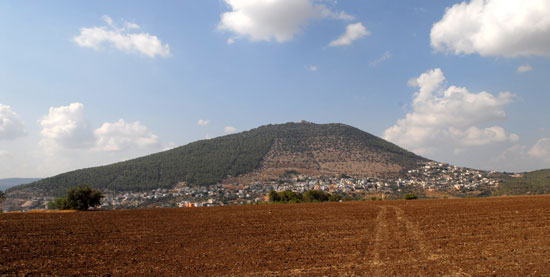 On Google Maps If you look from the Galilee, it is clear that these are not mountains in the usual sense, but a large mountain plateau, hence the heights are called and not the mountains.
Golan Heights - this is a large cake of volcanic lava basalt stone.
On the Golan Heights there is a whole range of extinct volcanoes, which in due time and "created" these heights. The color of the stone of this plateau is black.
The color of the natural stone of Israel (sandstone) is white. Because often in construction used black and white stone (so beautiful). 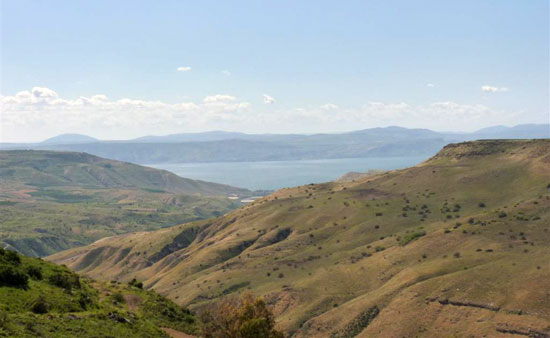