Google
The word Google came from the wrong spelling of the Googol number by Sergei Brin, which means ten to the hundredth degree - 10a100. 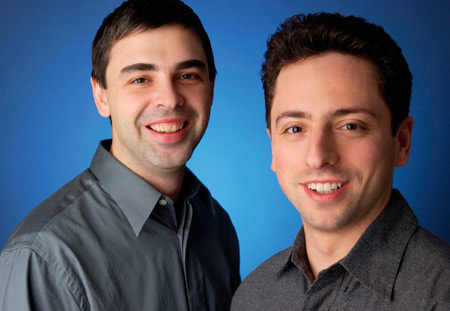 Born March 26, 1973, Lansing, Michigan, USA He received a bachelor's degree in computer science from the University of Michigan and a master's degree from Stanford University.

Born on August 21, 1973, Moscow, the USSR He was born to a Jewish family of mathematicians who moved to the United States in 1979, when he was 6 years old.
Father Michael Izrailevich - Professor of the University of Maryland, in the USSR, Candidate of Physical and Mathematical Sciences.
Eugene's mother is a specialist in NASA. Earlier he received a bachelor's degree in Mathematics and Computer Systems from the University of Maryland.
He received a master's degree from Stanford University.

The Google search engine was created as a training project for students at Stanford University by Larry Page and Sergey Brin. In 1996 they worked on the search system BackRub, and in 1998, based on it, they created a search engine Google. Although the corporation was founded on September 4, 1998, and the domain Google.com was registered on September 15, 1997, the search engine (from 2005 year) sometimes celebrates its birthday and on another day: both on September 7 and September 27.
Full version
Night mode