Airplanes on the map


Saturation of aircraft in Europe accelerated recording.
Europe 24 from NATS on Vimeo.

A map that shows in real time the position of aircraft in the air.
A Google map is used.
Tracking with the help of the service the position of the aircraft is possible only if it is equipped with an ADS-B type transponder and that is on.

It also shows the aircraft at the airport if you click on it, Then there will be information on flights, airport temperature, wind force, local time. I watched the plane go on taxiing, went to the runway and increased speed soared.

The system accepts callsigns for commercial and private aircraft, their status and much more.
The website also has information on the departure time, route, photo.

You can click on the airplane and you will find information about the route, plane a

A joint project of Boeing and Google. As a matter of fact, the promotion of the new Boeing 787 Dreamliner.
You can see on the Google map in 3D the routes of Dreamliner planes of different airlines where they are now, you can rotate by the plane itself and see it from the outside or admire the view from the window also in 3D to see the view from Windows in all directions.

Airplanes and trains on the map.

Want to see the planes that are now in the air and where are the trains now? Now you can follow them directly on the map.

Information about the flights and the calculation of the location is based on the data of the Yandex.Respisation service. Our planes fly in orthodromies - the shortest distance between two points located on the surface of the sphere (although in real life routes are routed through special air corridors).

Click on the airplane or train and see its route. 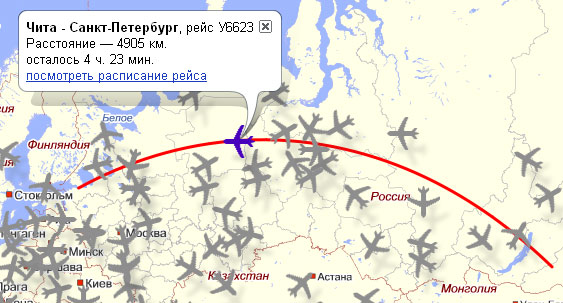 The largest source of flight data in the world. The service was born out of a need for unfiltered flight data, and that means the platform does not censor any information regarding the flights. You can use it to track all sorts of private and even military planes in the air and at any airport. Hobbyists, researchers, and journalists can use the platform, but commercial users will have to make payments for a commercial license from ADS-B Exchange.

ADSBexchange works by collecting data from volunteers. In order to share flight data on the website, you will have to get a Raspberry Pi, an SDI, and an Antenna. These will cost you between $100 and $200. You can get the hardware from the usual electronic vendors like Amazon and eBay, and you can purchase it from the ADSB Exchange store. Because of the nature of the task, volunteers are encouraged to get feeders that require minimal maintenance. The items should also be designed to stay active in harsh environmental conditions.

The OpenSky Network is a non-profit association based in Switzerland that provides open access of flight tracking control data.[1] It was set up as a research project by several universities and government entities with the goal to improve the security, reliability and efficiency of the airspace. Its main function is to collect, process and store air traffic control data and provide open access to this data to the public. Similar to many existing flight trackers such as Flightradar24 and FlightAware, the OpenSky Network consists of a multitude of sensors (currently around 1000, mostly concentrated in Europe and the US), which are connected to the Internet by volunteers, industrial supporters, academic, and governmental organizations. All collected raw data is archived in a large historical database, containing over 23 trillion air traffic control messages. The database is primarily used by researchers from different areas to analyze and improve air traffic control technologies and processes.